Sue Kanagawa Yuen is a performing member of Jun Daiko, a taiko group in Mountain View, CA. She and other members have studied Edo Bayashi with other “taiko nerds” in the area, and Jun Daiko received an Alliance for California Traditional Arts Grant (ACTA) in 2014 to bring Kyosuke Suzuki for several in-depth workshops on it as well as another traditional festival piece called Edo Kotobuki Jishi, the exciting lion dance of old Tokyo commonly referred to as “shishimai”. From her first exposure to the art form over 20 years ago, Sue’s affinity for it has grown and she has gradually grown into a proud Edo Bayashi nerd.

Sue (and her camera loving cats) was gracious enough to sit down with HET performing member Emily Harada to share her own Edo Bayashi journeys, comparing it to “eating your taiko vegetables” for good taiko health. Fellow HET member Oscar Chen edited this interview and provided editorial commentary.

Sue first began studying Edo Bayashi during her time training and performing in Hawaii as a member of Kenny Endo Taiko Ensemble (KETE) between 1996 and 2005. Kenny Endo himself had studied Edo Bayashi from Maru-sensei of Wakayama Shachu while living in Japan in the 1980’s, but it wasn’t until another member of KETE received a grant from the Hawaii State Foundation on Culture and the Arts in 1998 to study Edo Bayashi that he began regularly teaching it to supplement the ensemble’s regular taiko studies, a practice that continues to this day.

Sue studied alongside the initial grant team in 1998, oftentimes joined by Suzuki-sensei visiting all the way from Tokyo for supplemental workshops. While the suite was seldom performed on-stage, KETE would often perform it at local festivals, lending a Japanese matsuri air to the celebrations.

“Kenny would bring it out once a year right before the Honolulu Festival, when we would dress in yukata for a parade down Kalakaua Avenue. We would just play it a few times for bystanders while waiting to start the parade.”

Not all was so festive and easy-going though. Even for an experienced taiko player like Sue, beginning the arduous process of studying Edo Bayashi was a difficult context switch to make at first. Gone were the “flashy arm twists and bachi twirls” of kumidaiko, with leg-numbing seiza sitting positions and complex syncopated rhythms learned by rote memorization taking their place.

“It was so hard! We weren’t taught with music sheets at that time (as is custom) and it took me at least 4 or 5 years before I even liked it (giggles) … I hated it. For the first four years, I was like, “why are we learning this?” … I don’t know when I actually turned the corner to liking it. I think it was back in Hawaii when we were able to play it start to finish. It was a big accomplishment.”

“But we must have learned enough, because we (former KETE members) got together last Sunday (almost 20 years later) and we could still get through it. Something got absorbed.”

For Sue, Edo Bayashi was a way of engaging with taiko without constantly performing and instead focusing on developing her own musicianship. As an ensemble form, playing it together in a group was still a challenge to master while also being “more meditative and within yourself”.

“It is such a challenge to learn it … When it comes to Edo Bayashi, I really felt that it was for me. Getting better myself was something I hadn’t done in a long time. It’s not necessarily the people that I’m playing with, (although you have fun playing with people) but it’s really about my relationship to that piece of music.”

“It’s like what Franco (Imperial, of San Jose Taiko) says – it’s like ‘eating your taiko vegetables.’ It’s good for you and good to know.”

Speaking for Ho Etsu members, we can relate! We’ve begun incorporating Edo Bayashi rhythms into some of our soloing drills, drawing upon its improvisational nature and focusing on creating new music from its toolbox of patterns and rhythmic structure. Edo Bayashi has neither a forgiving learning curve nor is it immediately rewarding in a visceral sense, but its benefits come through dedicated, consistent practice. Just like eating your vegetables!

As an example, a few practices ago we spent some time revisiting Lion Chant, a piece written by our collaborator Shoji Kameda that includes several riffs taken directly from the shishimai repertoire. Although they originate from different lineages, shishimai and Edo Bayashi share a common musical language and so are remarkably similar in some sections. For members with previous experience with the piece, these funky riffs were notoriously counter-intuitive to learn at first (prior to studying Edo Bayashi), being difficult to pin down to any one time signature.

This recent practice was different though! Now armed with a practiced sense of uniquely Japanese patterns and syncopations, those Lion Chant rhythms instead felt like a familiar language to us — so much so that we found ourselves finishing the sentences they started with patterns we learned from Edo Bayashi.

“It’s like learning Edo Bayashi has forced us to get away from a Western idea of structure and rhythm that we were stuck in,” one member observed.

Even after leaving Hawaii and KETE, Sue continued studying Edo Bayashi on and off and eventually found herself playing with Jun Daiko in Mountain View alongside four other former KETE alumni. The five of them began to teach the rest of the group Edo Bayashi and shishimai, even purchasing a shishi-gashira (lion’s head costume) and performing the dance at Obon and private parties.

“For a while, I think we were one of the only ones on the mainland who were doing it. Now there are a lot of groups who have learned shishimai and are performing it.”

When Jun Daiko invited Suzuki-sensei to Mountain View as part of their ACTA Living Cultures Grant in 2014, they and San Jose Taiko participated in several joint shishimai workshops and quickly realized how much they had to learn about the art form and its history.

“There’s a section in the shishimai dance where we would tell people to put their hand out to get bitten by the lion (for good luck). And we would tell them they could attract the lion by giving a money offering. When he came for our residency, he was like “Why are people doing that?” because the lion is actually supposed to bite your head, not your hand … for years and years, we’ve been telling the audience to put out their hand! We weren’t fully explaining what was going on and after he came and visited and told us these stories, we changed the whole spiel of what it means to entice the lion to bite.”

“[After that], staying true to an art became a little more important to us. Learning from the source. As much as Kenny could teach us (back then), it was still second/third hand, and he learned it from Maru-sensei, so it’s different than what Suzuki-sensei is teaching now.”

Since Jun Daiko’s series of shishimai workshops with Suzuki-sensei, Sue has been organizing a group in the Bay Area to study Edo Bayashi more in earnest.

“In addition to the KETE folks, there’s one other person in our group learning it, and two others from TaikoSOBA, a group based out of Palo Alto Buddhist Temple. I call it nerd club actually, Edo Bayashi Nerd Club, and we’re trying to meet on a regular basis.”

While KETE alum started their own Edo Bayashi practices, Kenny Endo continued to spread knowledge of the form throughout North America, undertaking residencies from Seattle to Minneapolis and planting the seeds for the community of taiko players studying Edo Bayashi that exists today. As further preparation for Suzuki-sensei’s time in Chicago with us, Ho Etsu will also be workshopping the pieces with Iris Shiraishi from Minneapolis, who was one of the first beneficiaries of those Edo Bayashi tours.

As a final parting thought, Sue had this nugget of inspiration to share with us:

“You know what else I like about Edo Bayashi? There is an exact way to play it. You know how there are jazz standards where you could go and pick up and play with anybody? We could go and actually play with each other now because we’re learning the exact same thing. Everybody even plays renshu (a common practice piece) differently or their kata is different or whatever, but with this stuff you can jump in.”

This conception of a Edo Bayashi as a jazz standard was an intriguing idea and we think it’s a powerful one to explore! In contemporary American jazz, a standard is a popular composition or piece that has been listened to, performed, recorded, and interpreted many times over, so much so that that it has become an integral part of jazz culture and of any serious player’s repertoire. Aside from just being great tunes, jazz standards serve three basic purposes in the culture:

Edo Bayashi and shishimai, in their own way, certainly accomplish all three for us as taiko players. Over the course of studying it, we’ve learned how Edo Bayashi helps to form the aesthetic and historical precedent of much of contemporary taiko. In expanding our horizons and looking beyond ourselves to other taiko groups and players learning the same repertoire, we’ve seen how different parts of the taiko community can make connections (musical, cultural, or otherwise) with each other by tapping into this common language. Finally, the rhythmic and melodic toolbox it provides has helped us to break through each of our own modus operandi and to make music with greater artistic quality while staying grounded in a tradition that is larger than ourselves.

Well that’s it! Special thanks again to Sue Kanagawa Yuen, who took the time to speak with us and tell us her stories about learning Edo Bayashi and the wider taiko community. We’ve learned a lot, and can’t wait see what the future holds!

To cap off this installment of our Edo Bayashi blog, we’ll leave you with two videos that bring more life to this idea of Edo Bayashi as a kind of jazz.

This is a short clip from our upcoming mini-documentary featuring Kenny Endo speaking with our artistic director, Jason Matsumoto. Kenny responds to Jason’s question about encountering Edo Bayashi for the first time.

The second is a video of our mentor, Eien Hunter-Ishikawa, playing a groovy impromptu Edo Bayashi-influenced jam alongside Joe Small and Isaku Kageyama. Note: the play button will take you to the Taiko Community FB page. 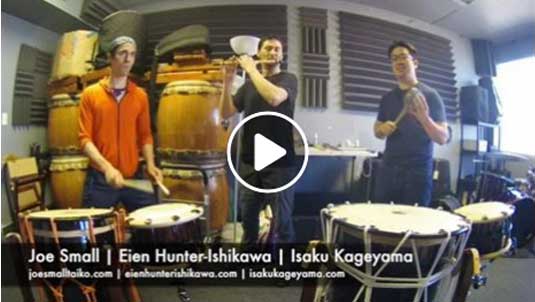 Sorry, the comment form is closed at this time.

Composer’s note: Poston is an incarceration camp in Arizona that held over 17,000 Japanese American citizens rounded up and displaced by the US government during World War II.

Only what you can carry, they said
An unknown future, moving forward
Separation, nulled identities
Stories hidden, some may never know

In the nightwood, dark and deep
The tiny songbird cries in sleep
Sleep my love, though the wind do wail
And snow clouds pile, and storm and hail

Black bough trees, cold earth beneath
The breath of night bares icy teeth
Water moves, though the moving’s slow
And the deepest root guards life below

Fire flicker, warm and bright
Bind us in your ring of light
Shadows tall on the cold ground cast
Draw dancing shapes of those who passed

In the nightwood, dark and deep
A tiny songbird sighs in sleep
Sleep my child though the wind do cry
My love will keep you by and by